So the planned holiday this year is the Pennine Cycleway. 360 miles of cycling along the spine of England from the very north most point to my parents. Ok, the actual route stops in Derby but it seems silly not to extend it slightly and abuse the family for free food at a place to sleep. This route has been described as the single most epic route on the Sustrans network. It passes through 3 national parks, past Hadrian’s Wall, and over numerous mountains including Hartside pass. I’m looking forward to it but I have to say though, it’s going to have to be something special to beat the Lon Las Cymru as my current favourite route. 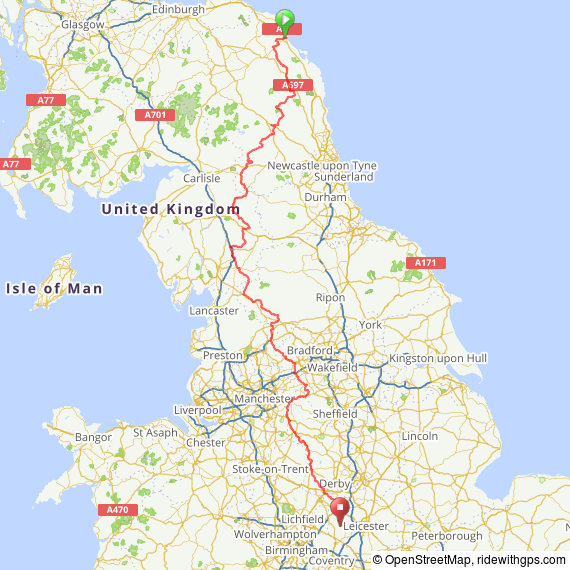 At the moment I’m in the planning and B&B booking stage. I’m setting out to do 60 miles a day over 6 days, spaced pretty evenly. So far I’ve been able to book B&B’s on, or only minorly off, the route which is good. I did apologise for booking so early to one of the owners but he assured me they already had bookings for next year!

I’m planning on doing this north to south (I always seem to end up doing these routes in the opposite direction to how its described everywhere else) as I can get a direct train to Berwick Upon Tweed, and I can end the route at my families house in Leicestershire. If I’m in time I’ll be able to stop in Ashby to get caramel doughnuts (yes that’s multiple) from Birds, still the best bakery in Britain, as well.

From now, I just need to get more long distance, and more regular riding under my belt. Roll on July.