When I made my random decision a few weeks back to cancel all my pre-booked bed and breakfasts, and camp instead (it’ll be fine, I’ve got the bike and it’ll be cheaper! Plus look at the lovely weather. Prat.) I’d left 2 B&B’s which I’d already paid for. Therefore I started this day rather well., with a brilliant cooked breakfast and a decent chat with the owner, whilst she made me a flask of fresh coffee to take with me. This meant I left a bit later than planned but that was ok, I had all day.

What followed was my hardest cycling day ever.

Starting out  I went directly to Bellingham from Otterburn rather than doubling back to pick the signposted route back up. This did mean I went over the top  rather than round the hills, but it was a few miles shorter. Whilst the weather had threatened rain, nothing came of it and by the time I’d got to Bellingham it had cleared up.

A quick stop at the bakery there (best millionaires shortbread of the ride by the way) to pick up lunch, then onwards heading south toward  Haltwhistle. A slow climb onto the ridge  to the south  then a right turn into the slightly less strong today westerly wind. This was ok. The route through Wark forest initially was lovely. The weather was just right, the road empty of every other human being, the forest lovely. finally though I got directed onto the most god awful forestry commission road. 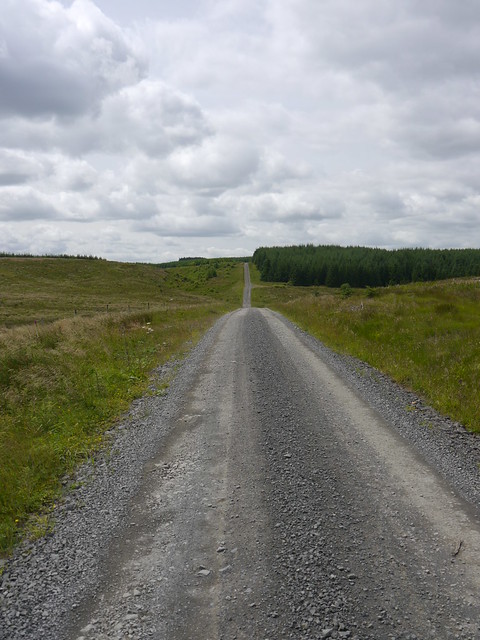 Large gravel, chewed up by heavy logging lorries. Having to walk on the uphills because it was too hard to cycle and pick a path without falling over. Having to walk down hills because it’s too dangerous to cycle and I didn’t want to damage a wheel, or burn out my brakes. Amusingly this was the busiest section of the ride since Bellingham, I was passed by 2 forestry commission vehicles, a logging lorry, and a jogger! After about a few miles of this the route goes off along a track that is free of motor vehicles. This means to start with, it’s actually rather nice. Less chopped up and smoother. Then the bog starts. Large puddles feet deep ready to swallow the unwary cyclist, mud, large tufts of grass that you cant cycle through either side. Rocks. Mud. Bog. I felt like Frodo trying to find a path through the dead marshes… 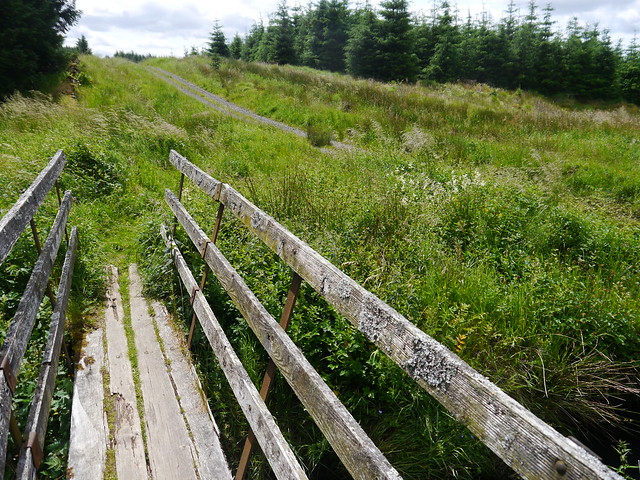 This section has won the title of “worse piece of Sustrans path ever” from me. Take the road, even if it means a diversion. Just don’t. Saying that, if you’re not overloaded with camping equipment and riding something more appropriate (one of those drop bar mountain bikes would be perfect) fill your boots.

After fighting my way through the bog, I was out and back into proper tarmac’d roads, leading down through the hills to Hadrian’s Wall.  It almost made up for the stuff beforehand. The views were amazing and you got a really good view of the wall and the geological features it is set on. It didn’t make up for it though. Still it was very nice.

I ignored the massive detour  passed Once Brewed and just headed straight to Haltwhistle. From there it was onto one of those very nice routes provided by the good foresight of Mr. Beeching. Apart from the diversion because some miserable grouch wont allow cycling over the very end of his garden (which means you don’t get to cycle over the very impressive  Lambley viaduct) this is a lovely ride. Towards the end  it’s a little overgrown, but there was tarmac under the grass. Lots of big farm gates to open and close though which is annoying. 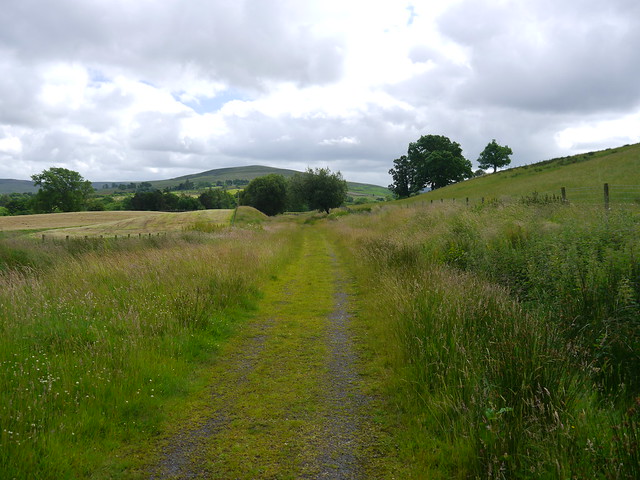 This section ends at the most excellently named Slaggyford. Then it was a nice ride through some back lanes  to Alston. I knew what was coming up so stopped at the Co-op for a bit of sustenance (OJ and chocolate, not the most healthy I know) then onto the highest climb of the whole week, almost 2000ft over Hartside Pass. It wasn’t actually a very hard climb, it was just long, and sapping. Mile after mile grinding up in low gears.  It lead to one of the highlights of the whole ride as well, 6 miles descending down an almost empty A road. Fantastic.

Rolled up to the campsite in Ousby  a bit later than planned, but still a good end to a very hard day.