As the hostel had no breakfast option I packed up early and headed off for a local cafe place. Well headed off after a short 2 mile diversion where I had to return to the hostel to hand over the room key I’d absentmindedly pocketed and not given in when I checked out. Doh. 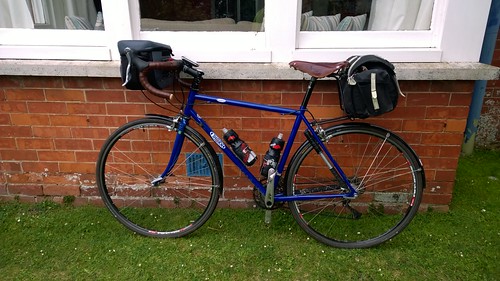 Anyway, I stopped at a place called the Weir. Breakfast was rather expensive at a nudge under a tenner but well worth it. The sausages were absolutely fantastic and everything else was top notch. 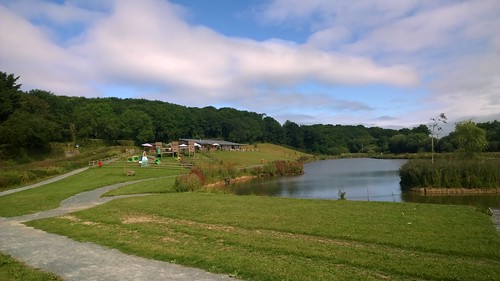 From there it’s mostly back lanes to Holsworthy, which apart from being pretty much car free, were a little up and down. There’s a really nice piece of off road cycle path for the last mile into Holsworthy along the old Bude railway bed. If they could extend that the whole way it would be a really fantastic route. Pity it’s so short really.

A quick stop off at the Filter Through coffee shop (recommended, and the cakes are amazing, in fact I ate one there and took a second for my barbag for later!) and onwards. The West Coast Way follow the rail bed along what at this point is called the Ruby way. This starts off well, but soon turns into a very rough track, much more suited to large tyred tourers and MTB’s than the road tyred audax bike I was riding. It was very slow going. It was over relatively quickly and I was back onto back lanes. As is usual for Devon these go up and down quite a lot, but I cant remember seeing any cars. Which was nice.

A little before Sheepwash it started to drizzle, which didn’t let up for a few hours. not really enough to get my waterproofs out, but enough to keep my slightly damp. At least I wasn’t overheating, which was a good job as the hill after Sheepwash was a bit of a killer.

After that it was onto the Tarka trail and the scene of my disastrous back wheel self destruction last year. Luckily this did not reoccur. I even had time to sit down next to one of the bird sculpture seat thingys that dot the trail and have a coffee from my flask and the cake I had squirreled away earlier. 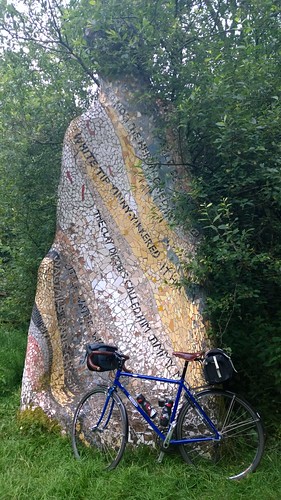 The top part of the Tarka trail is lovely and seemingly completely underused. You wind down through wooded valleys and across beautiful trail bridges with hardly anyone else around you. After Bideford things change. You enter the estuary, and it becomes a rather monotonous and very busy route all the way to Barnstaple. Whilst I enjoyed doing it once (it has a stark, wild, beauty), doing it again was just a case of keeping at a high speed and getting it over and done with.

I did stop off at the cafe in a train carriage at Bideford station and had a doorstep thick tuna sandwich and a proper mug of tea, but the lack of toilet facilities soon caused me to forge onwards!

A quick stop at the cafe at Fremington quay for the loo and straight on to Barnstaple where it started to proper chuck it down. I fished out the waterproof jacket and continued onwards. rather than follow the slightly meandering official West Country Way route here I just struck out up the B road to Bratton Fleming. Its all up hill and the rain wasn’t helping in making it the most enjoyable part of the ride so I was rather happy to see my B&B come into view.

On recommendation from the B&B owners I hung around the village for the Thai curry van to turn up. I was very glad I did! Lucky as well as they only come to the village once a week. I went to bed that night rather over full from excellent Thai food.