I headed up on the train yesterday to Holyhead.  That was not easy. I almost didn’t get there. First Great Western weren’t going to let me on at Taunton (I booked the tickets on the 15th of April and was told by their telephone desk that they couldn’t reserve bikes on Crosscountry trains, this was bollocks) there were too many bikes on the train already and me blocking a door was a “health and safety” risk. Ignoring the fact that as a health and safety manager I could have told them that was rubbish, if bikes are so popular on your trains why not provide more than the 3 tiny spaces then eh? Anyway the train manager saw sense and let me stay on after I begged. Then I almost got locked in on the Virgin trains I was on next. I had not been told that I needed to tell someone what station I needed to get my bike out at some it was only by pure chance that someone opened that compartment. 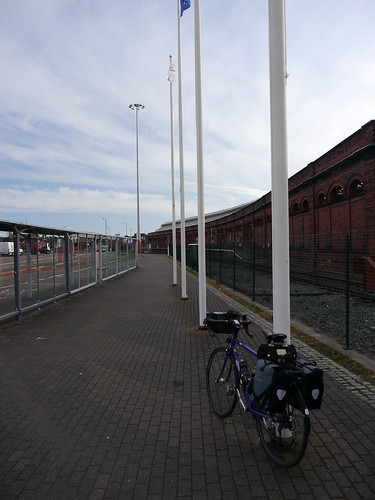 Anyway I final made it to Holyhead. I think the nicest thing that can be said about that place is that it’s a working town. I headed to my B&B with a short stop at Enochs chip shop for some fantastic cod and chips. I had the B&B to myself, but the lady running was very nice. The place was lovely and the view amazing. Good breakfast as well. 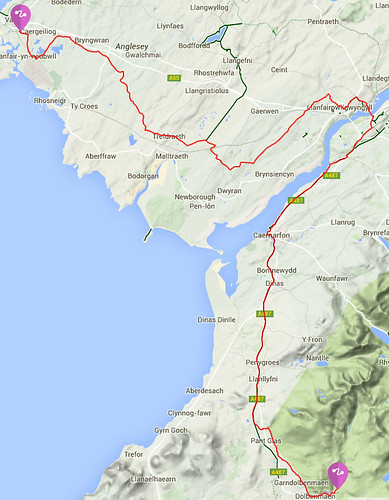 So I headed out this morning at 9am, the sun was shining the wind was not directly in my face (8mph Mr BBC, really? More like 18…) and I pootled along an a slow pace enjoying the scenery. Anglesey is lovely, but a bit like someone has ironed a section of Wales and filled it with old English people.

Wales did not disappoint, the weather which was freakish and wrong finally turned into the cloudy rain I had been expecting as I crossed the Menai bridge. The wind also decided to shift direction and blow directly head on to me from here until I finished.

The Lon Las Cymru follows and off road cycle path from Bangor to Caernarfon, which is good as the road it runs along is really rather busy. I’m sure there would have been lovely views across the Menai straights or of Snowdonia if the cloud wasn’t quite so low, but I enjoyed it anyway. I had planned on stopping in Caernarfon to go round the castle, but it started raining properly so I pushed on, only stopping under a railway bridge to have a coffee and sandwiches. 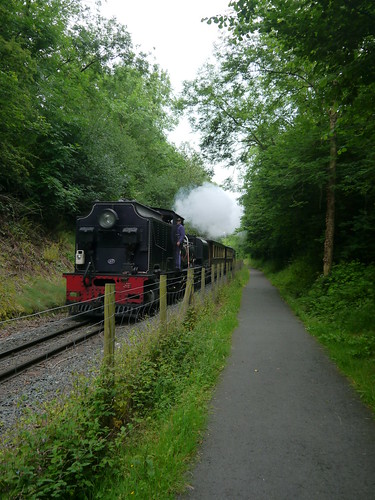 From Caernarfon the path follows a narrow gauge railway  and I did get to see a rather marvelous steam engine going past. The people looked dry. Maybe I should have taken that up the valley…

I diverged from the Lon Las Cymru to take a local route to my nights stop, Cwm Pennant Hostel. Got there a bit early, but it turns out I have the whole place to myself. It feels a bit mean making them fire up the kitchens to cook me tea and breakfast but what other option is there? 😉 As it was they had a huge amount of food left over from the weekend (where the had had 70 primary school children) and I got thoroughly over fed with lasagne and salads, followed by a huge fruit crumble. 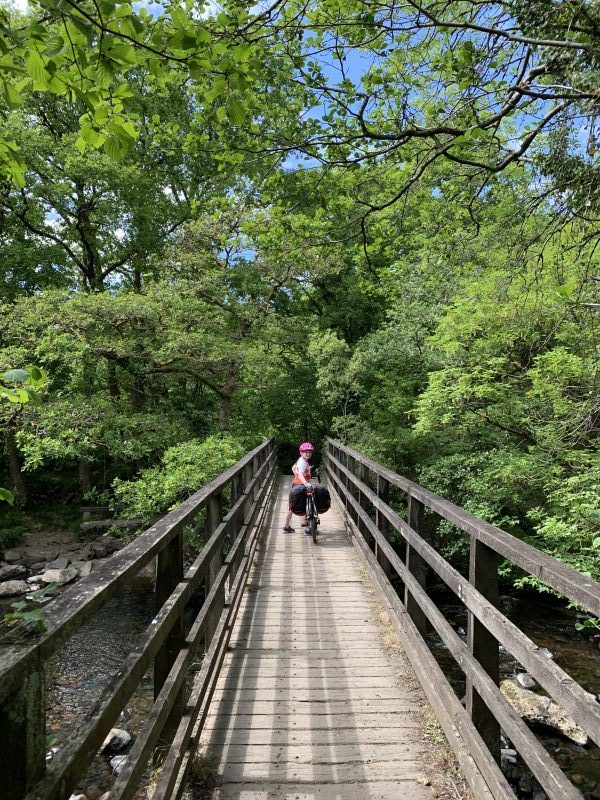