Breakfast at the Pigs Folly was very good. The benefit of farming your own pigs I would suppose! The place itself is a little tired but warm, quiet, comfortable. You cant really ask for much more. 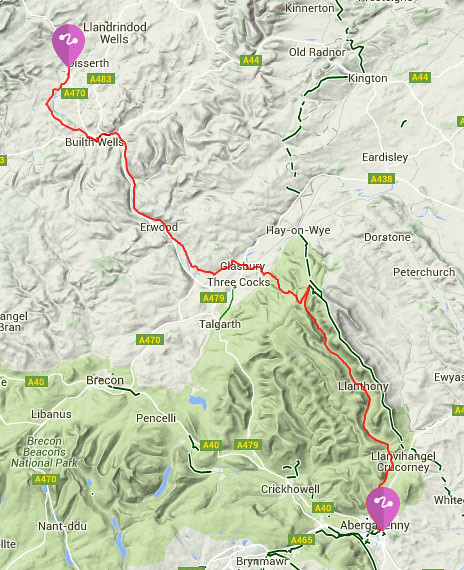 Weather looked ok through the window, but the ground was wet. Got the bike out and the rain seemed to have stopped. Got 200 metres up the road and it started again. I stop. Put waterproofs on. half a mile later the rain stops. Switch coats to wind proof top, and carry on. Bloody weather.

Anyway. The marked route takes you on back lanes from Newbridge to Builth wells as the main A470 can be rather busy. They’ve recently built a new A470 here though and renamed the old A470 as a B road of some sort. It looked empty and cut off a few miles so I decided to take it. What a fantastic road to ride. I met 2 cars the whole way along it. It’s wide, quite, and gives some great views. Unfortunately it ends just before Builth and joins the new road (at Cwmbach), but going north to south this wasn’t an issue as it joins on the good side for you and at the top of a hill that runs down all the way to Builth. Happy days. 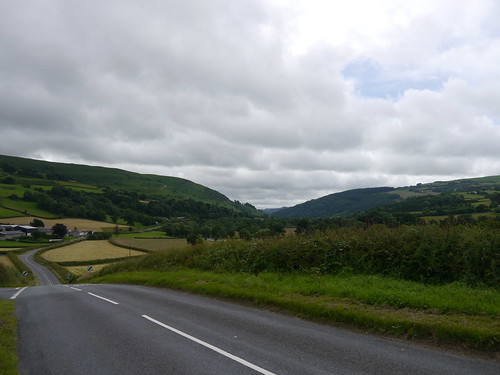 After a quick stop at the co-op for food I joined the LLC again along the banks of the Wye. You follow the rive all the way to Glasbury. I particularly enjoyed this section. It’s not hard at all and you can just meander along enjoying the scenery which, whilst not as impressive as earlier or even later on, is lovely. As is pretty much standard for this route it’s also dead for motor vehicles. Glasbury marks the finish of this valley ride though, as the climbing starts as soon as you cross the river. A quick loo stop in the carpark before crossing and I headed off. I had decided not to follow the main Lon Las Cymru route that takes you into Hay on Wye, but head straight up to Gospel Path. This “saved” 5 miles, but was not a good idea. The reason for this is pretty obvious straight away. The lower slopes of the climb are 20% +. I ended up pushing the bike up a very short, steep section which was an absolute killer. Luckily after this section it’s pretty easy going all the way to the top, even if it is rather exposed to wind.

The Gospel Pass did not disappoint. I’d been up here a previously walking the Offa’s Dyke path, but that was over 20 years ago now. I was looking forward to this ride from the start. It’s the highest paved road in Wales and is in some pretty epic countryside. Having lived in Cardiff and cycled the Taff trail in the past, I can wholly recommend doing this leg rather the Cardiff leg if you do the LLC. The Gospel Pass, and the valley after, are truly one of the highlights of the whole route and definitely beat trying to get through annoying cycle gates the length of the Taff! 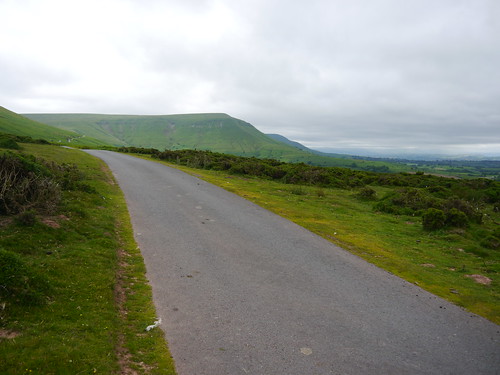 I stopped at the top of the pass to have lunch, then freewheeled all the way to Abergavenny. Well it seemed that way anyway 😉 I stopped halfway down the valley to see Llanthony Priory. It’s a ruined priory that dates back to the 12th century. It also has toilets and picnic benches, and a bar. cant really ask for much more! 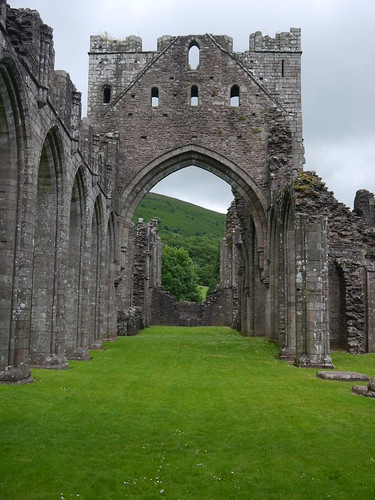 Leaving the priory the heavens opened. I had my waterproofs on luckily, but this was the only time I get proper rained on for the whole week. It lasted for 45 minutes or so, but as I was only 9 miles from my destination for the evening in Abergavenny I just cracked on. I felt sorry for another cyclist I saw going up the valley. He only had a t-shirt and a beard. Not sorry enough to lend him my spare waterproofs though!

My B&B for the night was the Blorange View, and was probably the nicest B&B I’d stayed at the whole holiday. Definitely gets my recommendation. I popped out for the evening to Pizzorante in Aber for dinner. Again gets a good recommendation. A proper pizza place ran by Italians who make a mean Napoli. it’s not often you get anchovies in the UK on pizze, and it’s one of my favourites so I go for it whenever I can. They also do a very good Tiramisu without the British obsession of stuffing excessive alcohol into it.